What's life like in an Aiglon boarding house? What role do houseparents play to make each house a unique and welcoming environment for students from all over the world? In our most recent magazine, we take a look!

Creating a home away from home takes dedication, creativity... and just a touch of magic.

Throughout her first year at Aiglon, Natálie Čmejlová (Le Cerf, 2013) worked hard to avoid Mr Nigel Gaston. He was Director of Music – and she was avoiding piano lessons. But when Mr Gaston and his wife Jacqueline became Le Cerf houseparents, she couldn’t escape their notice. “I wasn’t exactly the model student, I got laps all the time. But he was super patient with me, and the fact I calmed down is thanks to him,” she says.

For eight years, the Gastons turned Le Cerf from a former hotel into a happy home from home. “It had a lovely, quirky, traditional feel. We kept the original fixtures and fittings, and built up little families within the house – smaller groups of girls of different ages. One word sums up the ethos of the house: family.”

Cooking and eating together were key ingredients in Le Cerf family life, punctuated by special occasions: summer balls, graduation dinners and trips to major music events. “I managed to get tickets for the whole house to see Whitney Houston in concert,” Mr Gaston says. “We saw Madonna, too, and Lana Del Ray.”

Natálie’s fondest memory is more prosaic – a trip to McDonald’s (normally off-limits) on her last night at the house before leaving for university. “Mr Gaston drove me and a friend down to buy tons of junk food and the upper sixth ate it together over a glass of wine. There were candles and conversation – I cried during most of my last days at Aiglon because I didn’t want to let it go.”

Seeing students like Natálie – who is now in the penultimate year of medical school – blossom makes the long hours and hard work worthwhile, says Mr Gaston. “You eat, drink and sleep it. You’re intricately involved in the life and trials of these young students.”

“I’ve played trombone and conducted in the Royal Albert Hall, but nothing tops being a houseparent. It’s a challenge but a privilege too, having the opportunity to make a difference to young people’s lives. That’s the joy – challenging them, guiding them, laughing with them, becoming life-long friends. It’s the best job.”

Victoria (Le Cerf, Year 10) and Mrs Katherine Duckling both moved into Le Cerf in 2017, but being newbies hasn’t phased either of them. “When I get back to school I’m always excited about what it’s going to be like,” says Victoria. “Who am I going to share a room with and how am I going to decorate the walls?”

As new houseparents, the change for Mrs Duckling and husband Tom has been immense. They moved halfway around the world from a school in the tropical heat of Brunei – and they’ve taken to Aiglon like ducks to water.

“For the first week we were terrified, thinking how insurmountable it all seemed. We’re a young couple, used to having time alone, so we worried about having 40 teenagers around all the time,” she admits. “Now we know the girls really well, and we have so much fun. We’re lucky in having such fantastic girls, so it’s like having an enormous family.” This year, the Ducklings started a new tradition, based on the Hindu celebration Holi. “They’ve created this event called the World of Colour where we all throw powder paint and water balloons at each other,” says Victoria.

Le Cerf has seven values – and laughing is one of the most important. “Being a teenage girl is challenging, so teaching them resilience and giving them the ability to laugh at themselves is really important,” says Mrs Duckling. “We laugh a lot – and they laugh at us a lot too. I embarrass myself all the time and they see it doesn’t matter.”

Laughter helps too when things in sport or on stage don’t go according to plan. “We have quite an academic group, but we don’t win too much at sport. We don’t mind if they win or lose – as long as everyone has a good time,” says Mrs Duckling. “When we took part in the House Shout last year we didn’t win, but all the judges said we looked like we were having the most fun on stage!”

As passionate educators, the Ducklings stress the importance of running the house by consent, showing the girls how to behave rather than just telling them. “It’s really important that the houseparents model the behaviour you want,” says Mrs Duckling. “It’s important they see us working hard, going above and beyond but having a good time together. They all say they like to see that – that we’re happy and working together towards a common goal.”

When Isaac Middelmann (Belvedere, 2006) arrived at Aiglon after a serious illness, he’d missed a year of school and spent almost 12 months in bed.

“I’d always loved school, so I was in a dark place, cynical and feeling let down,” he remembers. “Mr and Mrs O’Connor welcomed me and accepted me as I was. They gave me time, space, and lots of support – but they pushed me too.”

And that meant that when Isaac was down, his houseparents were there to pick him up. “Mr O’Connor would say: ‘Let’s do something, let’s play squash, even if it’s just for 10 minutes.’ That really helped, because it was done in a loving, generous way, so I allowed myself to be pushed into activities I wouldn’t otherwise have done,” says Isaac.

Mr and Mrs O’Connor, now-retired houseparents of Belvedere, are ardent advocates of the power of sport to support, encourage and challenge young people. As a 14-year-old in a tough East London school in the UK, Mr O’Connor says a month-long outward-bound course in the Lake District changed his life.

Mrs O’Connor has a degree in Sports Science and English. “We brought the boys up through sport; it was a very conscious decision,” she says. “With that comes discipline, team work, health, and self-esteem.”

For Isaac, Belvedere, with its motto ‘To serve, to strive and not to yield’, was the best. “What was unique, and why I was so happy to be there, was our reputation on – and off – the sport’s field. Mr O’Connor was really proud when we had the highest average mark reading and won the school sports’ cup.”

But Isaac’s fondest memories are of Belvedere’s end-of-term dinners, and the speeches Mr and Mrs O’Connor gave. “They were personal reflections on each of the leaving students, beautifully delivered and without notes,” says Isaac.

“Having adults praise us in such genuine ways was a wonderful thing – and when we get together as classmates it’s something we still talk about.”

Having buttons cut off your clothes isn’t what most people remember from school, but St Louis is different – and so are houseparents Sue and Martin Goff.

“We have this thing called ‘Family on Sunday’,” explains Senik (St Louis, Year 12). “After dinner we get together to learn a new skill: tying a tie, changing a car tyre, avoiding internet scams. Every week is something new; you never know what’s coming.”

Mrs Goff’s favourite was replacing a shirt button. “They watched me with a mixed amount of interest – until I introduced a pair of scissors, cut a button off every boy’s shirt and said: ‘Sew it back on again.’ And, bless them, they did. The boys love Sunday evenings!” she says.

St Louis is Aiglon’s smallest house, and since it opened in 2016 the Goffs have made it a cosy, homely place. With children and grandchildren of their own – and 60 years’ combined teaching experience – Mrs Goff opted to be a full-time houseparent. “It gives me the opportunity to be in the house all the time and look after the boys during the day.”

It gives her time to bake, too. “Mrs Goff has made us cookies every day for the two years I’ve been here at St Louis. I love it,” says Senik. “She has lots of great recipes – my favourite is the banana bread she makes. It’s the best.”

What St Louis might lack in size, it makes up for in the warmth of its welcome. When boys get back after lessons, they head straight for the kitchen, fix themselves a drink and snack, and flop down on the sofa. “It’s just like they would do at home, which is exactly what we want,” says Mrs Goff. “A lot of boys from other houses love to pop in at break time – they know I bake every day.”

The highlight of the Goffs’ year comes at graduation. The moment when students – particularly those who’ve needed extra emotional or academic support – walk across the stage remains special. “You just think, wow, they’re my boys and don’t they look gorgeous. Having been instrumental in making that happen makes you feel proud and humble. And it still makes me cry,” says Mrs Goff.

“When we think back to our school days we all remember certain teachers, even more so when you live together 24/7. So I hope they’ll remember us for the love and kindness we’ve shown them, all the great opportunities we’ve given them – and even the buttons I cut off their shirts!” 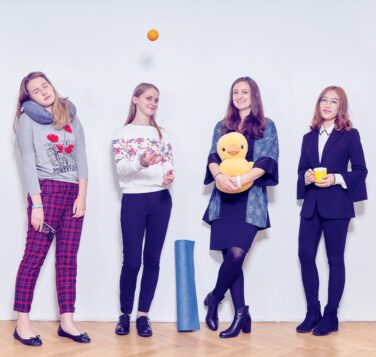 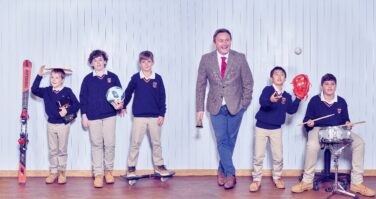 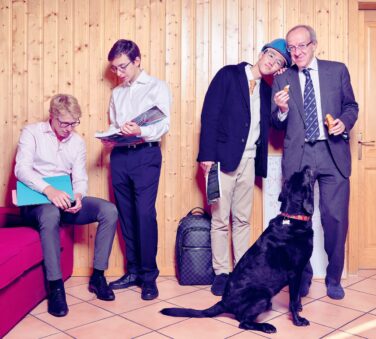