Before the half term break Aiglon's girls' and boys' basketball teams had the chance to compete in the Round Square tournament in Denmark. Ioana (Clairmont, Year 12) reports back about the girls' experience. Read about the boys' here.

My first ever time travelling with a sports team, my basketball team, was an experience I do not expect to forget easily.

Eight girls and seven boys from senior school, specifically years 11 through 13, supervised by our amazing coaches Mr George and Mr Steward with help from AHP Ms Broerse, set out for Denmark after months of training. Looking back, all the sessions helped us become a team and ever since coming back from winter break, we have been intensely preparing specifically for this trip.

We arrived in Copenhagen around midday on Friday, 1st February and spent most of the day taking in the beauty of the city while having to adapt to the windy, raspy cold, so different from the alpine breeze we all have grown so used to. We had little time to settle in as we arrived at the host school before checking out the court and practising one last time before the big day. By 10:30 pm, we were all in our dorms, tucked in and ready to rest for the tournament.

Saturday’s light greeted us early, at the same time with the rest of the house, even though the girls wouldn’t have a match until 1:30 pm. Nevertheless, we spent our morning with our fellow Aiglonians, cheering them in the first match, their first win. After lunch, it was our turn to be encouraged as we were getting ready for our game. Our challengers? Beau Soleil. Knowing the team and expecting their tactics, we adapted even before starting and won 20-8. A couple of hours later we had the next match, but we didn’t waste time! We were watching the other teams play, analysing their moves, their tactics and their strongest players. This, we thought, would come in handy when we went against the host team at 4:30 pm. To our surprise, the opposition was stronger than what we had mentally prepared for. A tougher match and a tighter score than our previous, as we won against Herlufsholm School 9-5.

Reflecting on both games, we realised that one of the major differences was the amount of work we put in right before the effort and the mindset we went in between the lines with. In need, we learnt some important lessons. Firstly, short sessions of running in the gym and some fitness get your blood pumping and your adrenaline levels right where they need to be for a game. Secondly, as long as you think you are better, you will not fight enough and most of the times, you need to give your best, regardless of how much the others are reacting. Whenever you feel bad for whoever is below you in a competition, you risk ending down there yourself. But on a more positive note, there is no need to take the competitive attitude off the court and getting to talk and meet all the other basketball enthusiasts is an adventure in itself. One that we were extremely grateful to have the opportunity to experience.

Sunday arrived with the prospect of playing in the final if we managed to keep up our spirits and performance against the two teams remaining: Windermere and St. Mary’s. We were woken up by Mr George “gently knocking” on our dorm door and we were ready to go faster and with more energy than ever before. Encouraging laughs and the time we enjoyed spending together was raising the morale and getting ourselves excited for the day. And even though we were confident in our forces, we refused to let it turn into overestimating our capabilities and gave our all during both games. Running up and down the courts, layups made one after the other by our main scorers: Klara, Ondine and Polina, rebounds by Stephanie and me, Ioana, and incredible steals and assists by Atri and Ana all added up to great team spirit and two wins: 20-2 against Windermere and 24-2 against St. Mary’s.

With the achievements of the day, we were tired enough to allow ourselves a well deserved “team nap”. We were about to rematch Beau Soleil as they won 3 of the 4 games they had played. The final caused a great storm inside every single girl as well as within the team. Emotions were rushing over us in waves, but we knew our goal and were determined to succeed. The moment the bell announced the start of the match, I felt all my fears almost instantly wash away and I could tell that everyone was living the moment. Baskets missed, free shots barely going in, passes up and down the court and a huge roller coaster of dynamic moves resulted in an incredible match. We knew we needed to be relaxed, but aggressive, doing what we do best. With every strong play, we were cheered, with Kritee in the lead, but joined by so many strangers on the sidelines, they were rooting for us. Rooting after we had proved ourselves worthy of their praise through the dedication possessed throughout the weekend. And so, after our competitors had been leading by no more than a couple points the whole game, we made an amazing comeback in the last two minutes, a 2-point basket scored by Polina and a free shot made by Ondine to set the final score, 10-8.

The immediate relief and pure joy that engulfed us as the bell rang again to announce the end cannot be put into words. Some were crying, some just bursting out in fits of laughter, but we were all smiling and giving out big hugs along with honest thanks and congratulations. As in every game, we shook hands and thanked the other team for the game, with everybody showing true sportsmanship after an intense play.

Photos and the closing ceremony were received with wide smiles on our faces. We finally had the chance to take a deep breath and metaphorically pat ourselves on the back for “doing it”. Clearly, it was about time to treat ourselves, and what better way than to indulge in an evening of pizza and soda, chatting amongst ourselves and with the boys, sharing moments from the games and simply relaxing. And, maybe most importantly, eating however much we wanted without having to worry about staying in shape for an upcoming game in the near future! 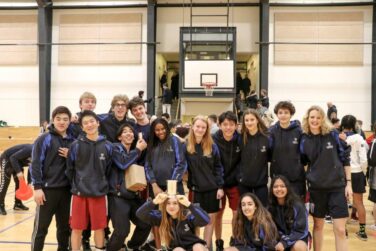 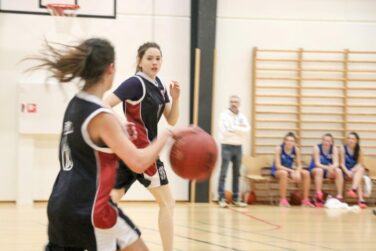 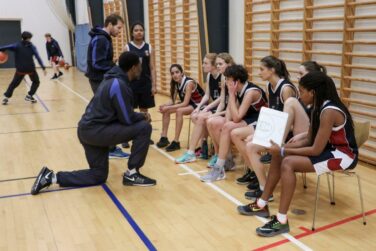 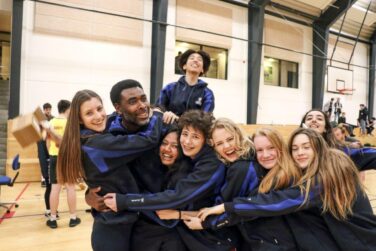