Before the half term break Aiglon's girls' and boys' basketball teams had the chance to compete in the Round Square tournament in Denmark. Jonas (Belvedere, Year 11) reports back about the experience. Read about the girls' here.

Before the Aiglon Boy’s first game the team and myself were a bit nervous because it was the first game of the entire tournament. We also didn’t know how Schondorf, our opposition, played. But after the tip-off all those feelings disappeared, the only thing I thought was to do what had to be done. At the end we were victorious 14-8. The second game against Samworth was different as we had seen them play, and we already knew their team.

Mr. George and Mr. Steward told us not to rely on their previous performance, but to go out and play as intense, strong, and smart as we always play. The result of that game was a dominant victory, 34-7

The third and last game of the group stage was against Louisenlund, the team who ended up winning would come first of the group. The star player of that team was also top scorer and rebounder of the entire tournament, but we thought they relied too heavily on him and that it would be an easy game. It turned out to be the hardest match of stage group. We started losing by 3 points, in the last minute of the last quarter, we were up by one, I was trying to do everything I could, but at the same time in my mind thoughts of insecurity were present. It wasn'y until Jared scored 4 points in 20 seconds, one after another including a steal, that the whole team felt that we had a chance to win. The opponent still had 30 seconds on the clock to score, I could feel the anxiousness of the team. After a missed shot, we took the rebound, and Daichi took responsibility of one of the last plays; he dribbled to the key, drew contact and took the shot...the ball went in. After that play the other team had little hope of winning and that’s how we ended up first of our group. A 16-11 victory

The first game of the quarter finals was against Sorø. We won 30-0.

The semi-final was against the hosts, Herlufsholm. They had the second best defense after us, that was because the team had two post players that were bigger and stronger than all of us! We started the game a little nervous, but as always the coaches were supportive and changed our mind set. The first half was really tight and close, but the local team was up by 2 points. The second half we went out to play as if we were starting the game 0-0. Some plays appeared and we scored some points and took the lead by one point, the score was 13-12. We were absolutely nervous, it was the middle of the last quarter, 3 minutes to play. We kept playing, with 36 seconds on the clock a shooting foul was called against us. He misses the first one, but scores the second. Tied game 13-13.
Less than 30 seconds on the clock, we went out there to score, Daichi again took responsibility and drove into the key and drew a clear shooting foul, but the referee only called foul. I in-bounded the ball but we missed. With less than 15 seconds to play their number 9 penetrates too easily into the key and banks it in. Mr. George called time out, and we had one last chance to score.
I took the responsibility to give the last pass, and I felt insecure, “To who am I going to pass, who will make the shot," but I shook my demons off, and decided to pass to Kenta, who was open, and for me, he was a reliable teammate. He was on the opposite side of the court, plenty of time for the defense to recover as I passed. I took the risk, threw the ball as hard, and precise as I could; he caught it but as expected the defense recovered, Kenta slightly hesitated and his shot was blocked. We lost, knowing that we could’ve won the tournament and felt terrible. A 13-15 loss.

We couldn’t lose our minds, we still had one last game to play, fighting for third place. We were against Beau Soleil. After seeing the Girls win the final against Beau Soleil, I felt that we had the obligation to give something back to the coaches who sacrificed massive amount of their time and dedicated their attention to us in order to make us successful. So we, Aiglon, went to play standing strong and with a winning attitude. We played that game, and had fun playing. I could see how we had progressed as a team in comparison with the start of the year. We played as a team, playing together for the first time this season and we won well by 9 points, 21-12.

We finished third overall, although third place is a decent spot, we felt that we could’ve done better. And all this brings thoughts of being better and will make Aiglon win the next Round Square tournament. 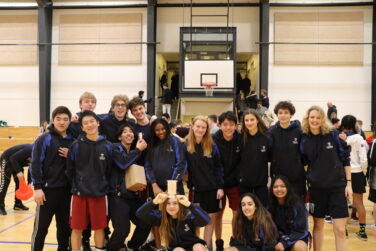