Unpredictable. Transient. Magnificent. Snow remains one of nature’s most intriguing manifestations... and a lifelong passion for Aiglonians.

Throw it, trek through it, hurtle down a mountain on it, watch it or taste it. For some, snow is the very essence of an outdoor life, the perfect environment for a life lived to the full; thrilling, life-affirming and romantic – even a business for some. For others it’s just a cold, wet nuisance. But whatever you feel about it and whatever you do with it, there’s no doubt snow is a fundamental part of the Aiglon experience.

“When I’m in the snow, on top of the mountain looking at the best view, where everything is white and the air is clean, it’s a feeling of purity,” says Kai Ye, whose son, Ling, is in Year 12. “Skiing is my number one passion. You ski down the mountain, and is doesn’t matter how big a boss you are, or how much property you own – you have to focus your mind on just one thing. And that is relaxing, it’s purifying. Rain gets you wet, it’s not comfortable, but when it’s snowing you can go outside and enjoy the snowflakes, like feathers floating in the air.”

Growing up in Shanghai, there was snow “but not much”, Kai says. His first real experience of the white stuff was in the mountains of Michigan when he was 22, and he didn’t really enjoy it. “I remember being really scared and exhausted after an hour of skiing. I went a few times after that but never really improved.

“Then, five years ago, a while before my son started at Aiglon, I came to Villars on holiday and had a great ski instructor who gave me some key elements, such as putting pressure on your boots so you get more control. I went straight from there to a ski shop in Villars and bought my first pair of skis.”

“Eighty per cent of Aiglon is snow,” says Saeed Zaree (Belvedere, 1987), who is currently building a luxury apartment building called Alpina – what else? – between two ski slopes in Iran. “I was 10 when I first went to Aiglon, and in my second term I experienced the snow. In Tehran, it snows a bit but nothing like Switzerland. The first time I put on skis my feet hurt and I fell down all the time, but after a week I loved it – that feeling of being so free, with no boundaries, just gliding and enjoying yourself. We weren’t allowed to jump, so we’d run to get there before classes to do a few spreadeagles and helicopters before the teachers arrived!”

But it’s not just the skiing that is so appealing about snow, says Saeed. “The white clean-ness, the cold, wearing a pullover and lots of clothes, being warm inside and sitting watching the snow falling. During the winter it’s all you think about. We couldn’t wait to get our ski boots on: as soon as class was over we would run for the télécabines.

“If it had been snowing in the morning we’d run out at lunch and have snow fights between Belvedere and Exeter. You’d be shoving snow down the shirt of some guy and giving him face washes, or you were the guy getting a face wash but you were enjoying it too!”

Saeed’s friend and occasional business partner, Yiannis Tavoularis (Delaware, 1987), has favourite snow memories from expeditions. “When you’re 14 you complain about everything,” says Yiannis, who spends part of the year in Villars keeping up his ski-teaching credentials. “But afterwards you realise what an incredible opportunity it was. I have a memory of having frostbite in my ear on Les Diablerets, and the pain! But also of coming through a snowy forest clearing and seeing a group of deer, very close. We were tired so we were very quiet, and they just stood still and stared at us – our jaws dropped. They were magical moments.”

Saeed, too, remembers the sheer pleasure of powder skiing on expedition. “The off-piste where no-one has been before, where the snow is not compacted but fresh, so it sprays up into your face as you ski down, is amazing. That feeling of weightlessness and freedom,” he says.

Snow is a weather condition, but it’s also subject to changes in culture. “When I was growing up in Valais [the Swiss canton] there wasn’t much to do,” says Philippe Magistretti, father of Alessandra, Year 13, and CEO of the Crans Montana ski company. “Snow meant a great day. You could sledge down the street – there were hardly any cars. A ski day used to have a routine: queue up at 8.30, ski until 12.30, have a hot dog and, if you’d been good, a Coca-Cola, ski again until 4pm, and then come home and do your homework.”

However, these days snow has competition. “Teenagers have PlayStations now,” says Philippe. “For a while, people thought young people were abandoning skiing. Now they’re coming back, but it’s also about snowboarding, competitions, slalom and cross-country trails. People want to sit in a nice restaurant and admire the view. In Austria, the slopes are a non-stop party, with a vodka ice-bus. It’s a ‘be up there’ experience. There used to just be huts – now there are nightclubs.”

But alongside the sheer pleasure of it all, around the world the ski industry is just starting to boom. As Beijing prepares to host the Winter Olympics in 2022, the Chinese government is pushing winter sports, says Kai, and the rapidly expanding middle class is responding. “There are now 300 million middle-class people in China,” he explains. “When people get used to a higher quality of life, they travel – and they go skiing.”

At Kai’s newly built indoor ski centre, Snow 51, in Shanghai, people can learn to ski in a simulator or on the dry ski slope, then try out their new skills in resorts in China, Japan and Europe. “Skiing is not part of our nature or our culture,” says Kai, “but it’s going to explode.”

In Iran, there is a similar phenomenon. “Before the revolution [of 1979],” says Saeed, “we had a ski industry because the Shah of Iran had been to school at Le Rosey in Nyon and was a snow lover. But after the revolution it went dormant. About 15 years ago the pistes began to open up again because of a change in the attitude of the Iranian middle class, who are travelling and discovering sports. Iranian youngsters are under pressure in the cities – to wear the veil, for example – but up on the pistes they feel more free.”

After Philippe left Valais he went to London but, he says, he always missed the mountains. “The first day of January in London is like any other day of the year, but in the mountains 1 January and 1 August are different worlds. Here, you feel very close to the seasons.”

Philippe came home to revive a ski resort that is not only close to, but depends on, those seasons’ increasingly fickle weather. “Over the past 15 years or so snow has become more unpredictable,” he says. “The quality, the altitude it falls at, the quantity, everything.”

Science has come up with an answer – artificial snow. “From a rational, product point of view artificial snow is fantastic,” says Philippe. “It allows us to ‘groom’ [prepare] the ski slopes independently of snowfall. It’s basically just water released at high pressure so it expands – frost balls thrown in the air, compared with snowflakes, which are a geometrical arrangement. Mixed with real snow it’s a perfect consistency: hard enough that you can grip it without sliding, durable enough to ski on it many times, soft enough that if you fall you don’t hurt yourself.”

But, he says, there is a problem. “If there is no snow people don’t feel like skiing! What makes people want to go up the mountain is the white trees, the romantic Christmas feel, the way there’s no end to the white carpet.”

How we feel about snow is not rational. Neither is our love for whizzing down a mountain. “This feeling of sliding is not a natural one,” says Philippe. “We’re built to run and walk but this is something different, and as humans we like this feeling. It takes us out of our usual life and into something else.” 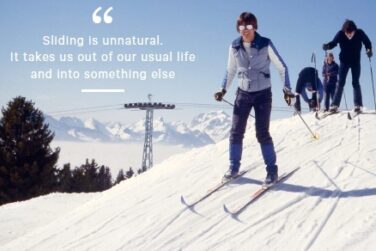