Service! Always dreamed of setting up your own place serving food and drink?
We meet the Aiglonians showing how it’s done – and delivering the hottest plates in town.

Few industries have as fearsome a reputation as the restaurant trade. “To want to own a restaurant can be a strange and terrible affliction,” wrote celebrity chef Anthony Bourdain in his 2000 bestseller, Kitchen Confidential. “What causes such a destructive urge in so many otherwise sensible people?”

Aiglonians, it seems, are not immune to these destructive urges. Take Patrick McDonnell (Belvedere, Clairmont, Alpina, 1968), for example: one of those “otherwise sensible people”. If anyone knows about the degree of determination and effort needed to prosper in this business, it is Patrick. His extraordinarily diverse career began on the management training programme of the Savoy Hotel Group in London. He has gone on to manage launches on both sides of the Atlantic, and served as executive chef at the Rainbow Room at 30 Rockefeller Plaza, New York City – at the time, the world’s highest-grossing restaurant.

Early in his career, however, an apparently insurmountable challenge became apparent. He says: “When I first went to New York in 1973, no one at the top French restaurants would employ me because I wasn’t French – even though I was classically trained in French cuisine. They had a stranglehold.”

It didn’t prove an obstacle for long. Before the decade was out, Patrick was being hailed as a pioneer of French nouvelle cuisine at Le Coup de Fusil, the New York restaurant that spearheaded the movement in the United States. He subsequently headed up new product development with General Foods and Conagra, became culinary director of the magazine, Food Arts, and co-founded the food consultancy, McDonnell Kinder & Associates with his wife and partner, Coral Kinder. In 1998, Nation’s Restaurant News did a feature on the 50 greatest food and beverage influencers across the US food industry and called him “the most famous chef you’ve never heard of” because much of his work was being done behind the scenes.

“My forte is building relationships, and being able to reinvent existing approaches,” he says. “That was the driving force for us chefs who developed nouvelle cuisine – taking hundreds of years of classical French cuisine doctrines, breaking them down and reinventing them for the modern era.”

Patrick admits that the recent months have been challenging in the extreme, and he has had to react at ‘warp speed’. “I am right on the firing line, working with our clients and the major operators to develop viable options and solutions. Thankfully my team is busier than ever, but it has required a radical repositioning for our entire company. John Corlette and his Aiglon team taught us to dig deep, adapt and overcome!”

Another Aiglonian, Luis Berenbau (Delaware, 1997), is ploughing a different but no less impressive furrow. As director of restaurant operations for Tacombi, Luis has played an important role in the “taco takeover” of New York. “There’s a misconception about what Mexican food is,” says Luis. “Even at school we used to go to Gringo’s – which every Aiglonian knows well – but that wasn’t the real deal. A lot of Mexicans feel their country hasn’t been showcased in the way that’s true to Mexican food culture, which is very rich and diverse, with influences from all over the world. And when we started out in the business in New York, we couldn’t really find that.”

The Tacombi story began with a Volkswagen Kombi van, which founder Dario Wolos drove to the Mexican resort of Playa del Carmen and converted to a taco stall in 2005. After transplanting the van – and authentic taqueria culture – to New York, he approached Luis to help him grow the business.

“He knew I’d worked in hotels and hospitality for a long time,” says Luis. “In fact, my family always lived in resort towns, such as Marbella in Spain, and even when I visited them from Aiglon, I’d work in a local hotel or restaurant. And at 12 or 13 years old, my parents would have me involved in their parties – I was very much at home hosting people, and felt I had a knack for it!”

The chain – now numbering nine outlets, including bases in the Empire State Building, Nolita and the Flatiron District – continues to raise the flag for authentic Mexican neighbourhood food throughout the city and beyond. But the biggest ongoing challenge has proved to be staffing. “We need to keep on finding people who embody the same values we do,” says Luis, “people who are energetic, humble and engaging, and who seek interaction rather than wait to be called upon.”

Transplanting one culture to another is something London-based Anthony Hood (Belvedere, 2001) – co-founder of the Farm Girl Café group with his Australian partner, Rose Mann – has spent the past five years doing. From its original site in Notting Hill, the business has expanded with a stand-alone restaurant in Chelsea, plus partnerships with clothing retailer Sweaty Betty (taking up a floor of its flagship Carnaby Street outlet) and the hairdressing brand, Hershesons, with concessions at its salons in Fitzrovia and Harvey Nichols department store.

Farm Girl aims to bring Australian brunch culture to the UK, offering healthy food and speciality coffee. “Rose spotted a gap in the market,” says Anthony. “We did a road trip in the United States, around the West Coast, and visited a lot of places in LA and Palm Springs that inspired us. Combined with what Rose knew of Melbourne cafés – and Australian coffee culture being way ahead of the game – we saw there was potential to come up with a concept that was lacking in London.

“We are very hands-on owners: it’s all about long hours and total dedication. With the help of our well-trained teams, we have managed to create a loyal customer base and become a go-to destination for many passing through London. There’s no better feeling than a happy new customer.”

That passion is evident in another Aiglonian, Amna Alyamani (Exeter, 2005). Growing up in Saudi Arabia, Amna would eagerly watch her grandfather – a professional chef – at work. She began her own baking experiments at the age of seven, and made good use of her talents at Aiglon: she recalls making brownies and cookies for charity sales, and working out how to make a dairy-free chocolate cake for a teacher who was vegan.

It was former Head Master Dr Jonathan Long who first encouraged Amna to turn her pastime into a profession. “He was my Religious Studies teacher at the time,” she says. “He asked me what my favourite hobby was, and I said baking. He said, ‘If you live a life in which you bake every single day, you’ll never feel like you’re working’. That has stuck with me always. And I thought, OK, I love to bake, but I’ll also learn about management so I can build up my own chain one day.”

After completing Cordon Bleu training in Paris and an MBA in Barcelona, Amna finally started a bakery in her home city of Jeddah last year. Its mission is not just to create delicious cakes and pastries. With a female-led workforce, Amna Bakery offers valuable training opportunities in a nation where 30 per cent of women were unable to secure a job pre-pandemic.

The bakery works on a “cloud kitchen” model. After a rental agreement on a shop fell through, Amna realised that the business could thrive without any customer-facing premises as a start, relying solely on food-delivery apps and B2B services to sell her creations. She says: “The cloud kitchen is becoming a global norm, but it’s something that doesn’t exist in Saudi yet – I’m one of the first, and the lack of overheads is proving a successful model in these challenging times.”

So what attributes are needed to prosper in a trade that’s so notoriously demanding and competitive? “Really, the restaurant business is a human business,” says Luis. “People think it’s about having the best food, but it’s a platform for human interaction, both with customers and staff. When I was at Aiglon, we had 52 different nationalities represented. In the company, we have 30. No matter what each Aiglonian’s social, economic or religious background was, everybody was treated equally, and we treat everybody exactly the same at Tacombi.”

What’s more, Patrick believes the culture of Aiglon is a firm foundation for kitchen and boardroom alike. He says: “Two things were really important at Aiglon: integrity and tenacity. They were instilled in us both in an upfront way and subliminally. A reputation for integrity is a huge advantage, and I have maintained that throughout my career – the idea that you should live up to who you are. And you have to be tenacious.

“So, if I gave advice to a new graduate who was hoping to go into this business, I’d say put your integrity at the top and never give up. You don’t have to have limitations; there’s nothing you can’t accomplish if you set your mind to pursuing it.” 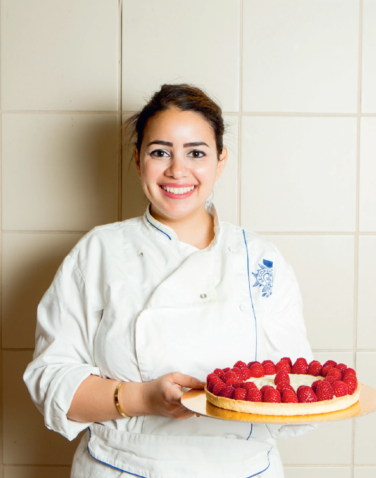 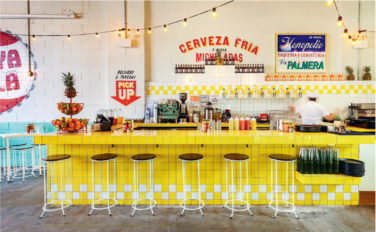