We were greatly saddened to learn on Saturday 27th June of the death of Lisiane Lefèvre, one of Aiglon's longest serving members of staff.

Appointed as a teacher of French in September in 1972, she would retire in 2009 after 37 years during which she forged a unique identity and space in the life of the school.

Nobody who met Lisiane, even for a few minutes, could be left thinking that they had not encountered an unusually colourful character. Instantly engaging and almost as instantly surprising, Lisiane had a gift for dismantling the staid conventions of Anglo-Saxon familiarisation, launching with bravado into passionate and good-natured dialogues laced with humour. While many of us persuade by reason, Lisiane unfailingly sought to persuade by passion, unbridled enthusiasm and a contagious joie de vivre. Creativity and spontaneity were qualities she esteemed highly in her students, but not at the expense of hard work, and she would not hold back if she felt her charges had misplaced their academic priorities or failed to prepare adequately for a theatrical rehearsal.

For many years Lisiane was synonymous with French theatre productions at Aiglon. Her irrepressible badinage wove in and out of both real life and the staging of shows where ultimately the imagined characters paled into the penumbra in the face of Lisiane's own sparkling, mercurial aura. Even after she stepped back from these much esteemed productions, her thespian disposition lent drama to almost any situation, however intrinsically mundane.

Towards the end of her career and at the beginning of her retirement Lisiane was the driving force for an initiative to bring Aiglon's students together with the older members of the Villars and Chesières community. The "Elderly Lunch" as it came to be known has become a cornerstone of Aiglon's commitment to service locally. Two or three times each year gatherings of up to 100 of the local older citizens have been hosted in the school hall, enlivened with music, dance and multilingual, cross-generational banter. I can still picture an Aiglon student dancing with the 107-year-old doyenne of the Canton of Vaud. This enduring initiative is a great legacy to remind us of Lisiane's unselfish kindness, big heart and unabashed sense of fun.

And so a long and distinctive chapter of life closes; beyond the immediate sadness of loss I believe we can be grateful that many generations of Aiglon students can reflect on the diverse parade of shaping characters they encountered in their school lives, and in that assembly Lisiane will figure for many as one of the most memorable.

A memorial service for Lisiane will be held at the Villars Catholic Church on Wednesday 8 July at 14:00.

The photo at the top was provided by Erik Friedl (Alpina, 1969). The second image was the last photo taken of Lisiane, by former Aiglon staff member Francine Isoz, as they enjoyed a visit together by Lac Léman. 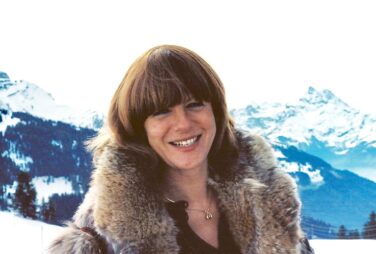 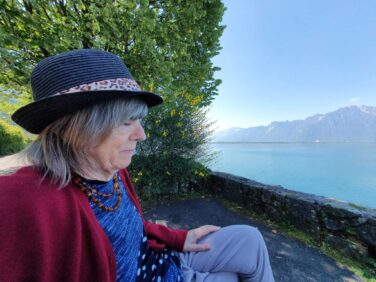