Congratulations to the 72 graduating students from the class of 2021!

Celebrations for this wonderful group came to a fitting end at our graduation ceremony on Saturday. Streamed live across the world from the Tony Jashanmal Sports Centre, a recording of the ceremony is now available.

The ceremony running order and list of prize winners can be seen below. Well done to all our Year 13's!

VICTOR AND VICTRIX LUDORUM: Awarded to the students who, during their Aiglon careers, have shown outstanding involvement and attitude in school and inter-house sports.

CARPE DIEM QUAICH: Donated to the school by Russell Lewis who believed in always living life to its fullest. He asked that; "This cup be presented to the student who was deemed to also have taken every opportunity that Aiglon offers in as many fields as possible and lived the full Aiglon Experience.” (Caroline Lewis, 2011)

BIBI PARSONS PRIZE FOR SERVICE: Awarded for service to the community, whether to the school, the local or even the international community.

THE ROUND SQUARE KING CONSTANTINE MEDAL: In recognition of individuals who have done outstanding service work and have thereby supported and promoted the ideals of the Round Square. The reverse of the medal carries the words “For self-effacement in the common cause.”

ENVIRONMENTAL PRIZE: Awarded to the student who has shown in their actions that they understand the tenet that to deal with a global environment issue one must first deal with the issue at a local level.

VIRTUS AWARD: In recognition of an outstanding contribution to the life of the school through active participation in its varied programmes and in upholding the ideals of its founder, John Corlette, through personal example and service to the community”. The key word in this citation is “outstanding”.

JOHN CORLETTE PRIZE: The citation reads - “The boy or girl who best exemplifies the ideal which John Corlette as Founder wished to see graduate from his school”

MERIT CUP: The Merit Cup is awarded to the student, or students, who show outstanding merit in both leadership and service, at school level.

The following represent conditional offers of admission confirmed upon IB results in July 2021.

University of the Arts, London

The following represent conditional offers of admission confirmed upon IB results in July 2021.

We wish the class of 2021 every success in their future and look forward to their continued involvement in the Aiglon community as alumni. 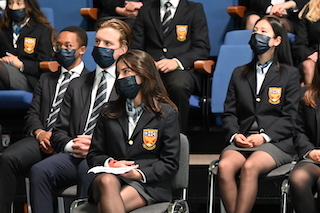 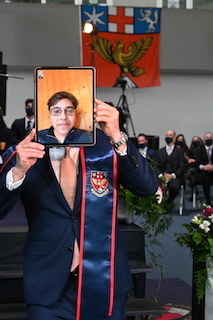