This year's Junior play was entitled 'The Island' in which each of Junior School drama sets presented a 10 minute extract from a play with an island setting.

We witnessed a charming physical theatre interpretation of Where the Wild Things Are, followed by an extract entitled Junanji - The Island, which was accompanied by an atmospheric group of 8 'cajon' players - (Spanish drums).

Then came two classic island tales adapted from Lord of the Flies by William Golding and The Explorer by Katherine Rundell. The evening was capped off with an extract of the British National Theatre version of Treasure Island.

Linking scenes between extracts portrayed a number of junior expeditioners 'lost' on the Island.

All in all we enjoyed an eventful evening, full of high drama and in which every junior student performed. Such fun! 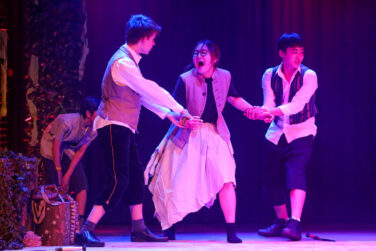