At Aiglon, students from around the globe learn to live side by side. But what’s it really like when your best friend has ideas that are literally from the other side of the planet?

Alice Cervini and Victoria Li come from opposite ends of the Earth (Milan and Hong Kong). They speak different languages and have different outlooks, backgrounds and attitudes. What could they possibly have in common? Well, Aiglon is renowned for bringing people together, and so it proved in this case – with a little extra help from quarantine.

“When we first met, we didn’t like each other very much,” admits Victoria. “And under normal circumstances we might never have become friends. But when the first quarantine hit and everyone in our friendship groups left, it was just us.”

“When I saw Victoria was here, I thought, ‘Let’s go talk to her’,” says Alice. “At one point she was quarantined so I took my chair and sat outside her room and we just spent afternoons talking.” “For two weeks we spent every minute together,” continues Victoria (the two swap and finish each other’s sentences). “We started talking about what we have in common and found it was so much.”

“Usually, my parents would come most weekends to see me,” finishes Alice, “but with Covid they couldn’t, so I realised I’d have to sort of make myself a family.” (At which both girls “awww” and hug and laugh.)

It may have been given a 2020 twist, but that’s the Aiglon way – a whole range of different nationalities coming together in perfect harmony. The melting pot atmosphere can make for a learning curve like no other – and can build friendships that enrich lives above and beyond the usual school experience.

“In my old school, I’d be quite quiet,” says Alice. “But here, I knew I’d have to make friends or go home. I think they like putting different nationalities together as roommates, and we’ve come across so many in our house – French, American, Japanese, Russian, Nepalese – all round the world!”

Antonio Crosswell Goudet and Issei Akita (both Belvedere, Year 10) arrived at Aiglon at the start of the 2020 school year, hailing from Mexico City and Tokyo, Japan respectively. It was the first time boarding for both, and they laughingly admit to feeling some worry about adapting and finding friends. As it turned out, though, they hit it off immediately after being placed in the same room.

“It was pretty natural,” says Antonio. “That first day we shared our social media profiles, and by the end of the week he started to open up and we found we had a similar sense of humour.” So much so, that when Issei cut himself slicing bread, his first instinct was to go to his friend for help.

“I thought he was playing a prank, with ketchup or something,” says Antonio. “It was only when I saw that blood coming out that I realised we needed to get it cleaned up and get him to the nurse, who quickly patched him up and he was fine.”

“The sharing rooms often creates really strong bonds,” says Mr Mike Cornish, Aiglon’s Service and Spiritual Life Leader. “But you’re unlikely to be with the same person for your whole school life. All houses use different systems, but most rotate roommates termly, so you get to meet new people and get used to making it work. You need to learn about people’s sensitivities, their idiosyncrasies, their cultures, and really get to know them.”

Aiglon has multiple ways of helping students get to know their peers better, Mr Cornish explains. “Whether you’re into music and DJing, technology, recycling or the outdoors, there’s a place you can do that. Student interaction isn’t just built around lessons and expeditions. There are lots of activities that foster friendships across house and across year groups.” Those same activities can both strengthen and be strengthened by preexisting friendships: Victoria and Alice encourage each other to go to the gym; Issei and Antonio “go running and play football together, and we’ve both signed up to try climbing.”

Expeditions, by their very nature, require a degree of mutual reliance that solidifies relationships. “You’re with that group 24/7,” says Mr Cornish. “Every time you cook or put up a tent you are sharing responsibility for providing food and providing shelter. You’re relying on other people for your safety – and they rely on you.” “But it’s not just about physically supporting each other,” says Victoria. “It’s about sharing memories of getting to the summit together. That moment you take a photo of you both to say, ‘We got here, together’.” “On Ex, you’re put into random groups, so you have to spend the whole day with people you’ve maybe never spoken to before,” says Alice. “And if we don’t find someone to talk to,” adds Victoria, “we talk to the teachers, and that’s another kind of friendship.”

That willingness and ability to be open to others is something Aiglon works hard to foster, not least during daily Meditation, which can be given by students and staff alike, as well as visiting speakers. “You feel you’ve really learned something about the person,” says Mr Cornish, who is responsible for programming the Meditations. “I spoke about part of my family being Indian and the racial abuse some family members experienced; others have talked about overcoming disappointment, loss or physical challenges. The stories are incredible, personal and applicable. But some are funny and light: you might hear about a skill, a passion or someone’s family life. They go a long way to developing a culture where people are open and accepting.”

Service trips are another way of directly experiencing the home countries and cultures of fellow students – or actively sharing one’s own, such as the planned trip to Istanbul organised by two Turkish students to help in a local school and experience the sights of one of the world’s great cross-cultural cities – or the online charitable relationship supporting small-scale farmers being established by an Indian student in her home country. “We don’t have to suggest these things,” says Mr Cornish. “Students come to us under their own steam.”

But as well as the more formal activity, many students find just chatting is the best way for cultural exchange to happen naturally. “The other evening,” says Alice, “Victoria started talking about her family traditions. I was super-interested, because in China they seem more defined, whereas in Italy they’re not so formal.” And Issei and Antonio have been learning each other’s languages and cooking speciality dishes for each other. “There are a lot of differences about a school like this that make you more tolerant and patient,” says Antonio, “even if that’s just hanging out at weekends.”

CONNECTIONS ACROSS THE WORLD

Of course, while boarding school places students into greater proximity during their school days, it inevitably scatters them further apart once they leave. Aiglon’s graduates maintain connections across entire continents. Antonio and Issei have already worked out how far apart they’ll be once they leave – “it’s seven hours’ time difference,” they chorus in mock dismay. Issei is already planning a trip to Mexico. “I know a lot of graduates who still stay in touch, even after so long,” says Victoria. “The connections they’ve built here are that strong.”

Indeed, these two international pairs are already planning how they can stay teamed up a little longer. “Every term in Belvedere you write down the names of people you want to room with,” says Antonio. “It’s not guaranteed, but they look at things like if you help out around the house and have good marks.” “So, he helps me a lot with prep and with my English,” says Issei. “I keep him out of trouble,” laughs Antonio. “And he helps me with Maths. He’s so incredibly good at it.” Alice and Victoria, meanwhile, are applying classroom skills to their campaign to stay as roommates. “We’ve written an essay making our case,” says Alice. “It’s two pages long and is a proper PEE – point-evidenceexplain – argument,” says Victoria. “We’re determined!”

And as Aiglon’s alumni can attest, friendships built on the mountain endure. “As long as you stay the person you are, and don’t try and change yourself, you will attract people who want to have a long-term friendship with that person,” says Victoria. And Alice agrees: “No matter who you are or where you’re from, there’s always someone who’ll come and talk and be your friend,” she says. “And, often, those friendships are made forever.” 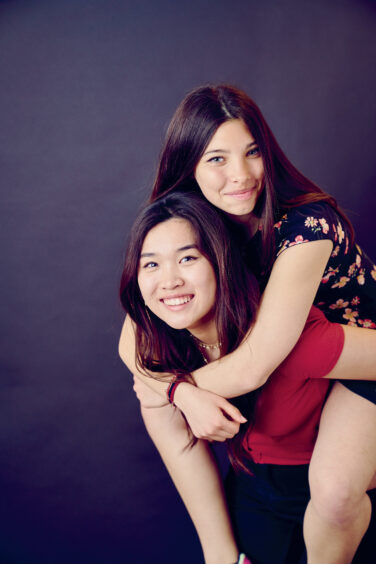