In a year of change, we talk to Aiglonian campaigners about their work, and why being part of a global network is key to making real change.

From Issue 15 of the Aiglon Magazine

The people have spoken. Online petitions; Twitter campaigns; taking to the streets for and against a myriad causes. In 2020, shock and anger quickly turn to a desire to do something – anything – to help set the world to rights.

But how do we begin to make a difference? And how do we join our voices with others to achieve real change? Service is at the heart of Aiglon life, so it is not surprising that so many of our community have made a deep commitment to the cause – from climate change and wildlife justice to refugee welfare and nuclear disarmament. Their experiences hold lessons about how we, too, can take action in a world in which we’re now all activists.

First, is the simple realisation that, yes, we can play a part. “We so often feel disempowered – convinced we can’t do anything to change the situation even if we want to,” says Tanya Ogilvie-White (Exeter, 1987), whose day job as a senior fellow at Australian National University sees her working on nuclear arms control, while producing heartbreaking ‘artivist’ paintings in her down-time to raise awareness of the bushfires and the global climate crisis they have come to represent.

“Getting people to believe in their own power, individually and collectively, is the ultimate key to successful activism. It doesn’t matter how young or old you are, where you are from or what your background is, if you are well informed and have a strong sense of purpose, you can be influential – and you can effect change.”

Indeed, the most immediate and impactful changes are to our own lifestyles, which is where Francesca Jobson (Exeter, 2019) decided to start. “I set out to lower my carbon footprint and contribute as little as I can to the consumption our capitalist system encourages us to relish,” she says. “That includes things such as buying local and seasonal plant-based produce, using public transport and my bike rather than cars or planes, and only buying what I need – and then ideally only second-hand.”

But solo actions only go so far. Outreach extends activism. While still at Aiglon, Francesca (now studying Geography at the University of Manchester in the UK) encouraged the school to support student participation in climate activism – for which she received Aiglon’s first Environmental Award.

And she recalls one bold choice in particular. “I asked to go on the climate strike in Lausanne instead of hopping on a plane for a school trip to Amsterdam,” she says. Not everyone was supportive, but Aiglon gave permission – and Francesca describes attending as the best decision she could have made. “Being alongside 15,000 other individuals who care as much as I do was an incredible experience. Being part of a regional, national or global network is key because we all need to be in on it together.” Francesca is now a regular attendee of climate strikes, and uses Instagram as a platform to share hopeful messaging on environmental issues.

The power of visual imagery to move and inspire is something that Tanya recognises, having been moved by the devastating Australian bushfires to create her ‘Extinction’ series of artworks depicting threatened wildlife. “It’s raw ‘artivism’: creating art in the heat of the moment; emotional art to soothe my broken heart; political art to push for change,” she says.

Bogotá-based Nastassia Kantorowicz Torres (Exeter, 1999), who studied Documentary and Visual Journalism at New York’s International Center of Photography, also works through the power of visual art. Using photography and mixed media to denounce, and highlight solutions for, social injustices and human and environmental rights, her emphasis is very much on collaboration.

“It is not enough to document only a few hours of life as photojournalism does, sometimes not even asking the participant if they want to be photographed, not listening to what they have to say, just grabbing that image of a person living in a shack, victimising the victim, and then leaving,” Nastassia says.

Her hope is that her images document the harsh reality, yet also show the audience that solutions do exist, that there is hope. “But even the most powerful images alone cannot create change. It’s a collaboration of articles, lawyers, NGOs, citizens, scientists – everyone’s efforts joined for a cause – that can spark change.”

Collaboration is also central to the efforts of two of the Aiglon community whose work doesn’t take place on the streets but within the complex web of national and international relationships. Olivia Swaak-Goldman, mother of Felix Swaak (Alpina, Year 12), is executive director of the independent not-for-profit foundation Wildlife Justice Commission (WJC), which was created in 2015 to fill a gap in approaches to protecting endangered species. “Many organisations are working on biodiversity loss, approaching it from a conservation perspective,” says Olivia. “But it’s also the fourth-largest transnational organised crime, whereby serious criminals are devastating endangered species such as rhinos and orangutans for profit, and no-one’s been looking at it from a criminal and law-enforcement perspective.” The WJC produces evidence bundles that are then passed to governments for prosecution. “We make it easy for governments to bring these cases, and harder for them not to. It’s difficult for them to explain why they’re not prosecuting when they have a 5,000-page case file.”

To deliver action, the WJC also links with judges, investigative journalists and diplomats. “But I don’t really think of us as activists,” says Olivia. “My career has been about how you develop political will, how you get governments to enforce the laws and obligations that they have agreed to. The failure to apply intelligence analysis, and lack of co-ordination within governments are real challenges, and internationally there’s very little cooperation. Yet crime is transnational, so we act as a bridge.”

That’s a position familiar to Jef Groby (Belvedere, 1969), who spent more than three decades working for the United Nations High Commissioner for Refugees (UNHCR) in progressively senior roles in logistics management, principally in sub-Saharan Africa. He traces the origins of this career back to Aiglon – and his history teacher, Mr Neville Ollerenshaw, in particular – as well as his university, Middlebury College in Vermont, where he realised that “listening to white men talk about Africa’s history was like putting round pegs in square holes, so I decided to go and see for myself”. After volunteering in Cameroon and Tanzania, he joined UNHCR in 1980.

“UNHCR’s modus operandi is working through partners, whether other UN agencies, international, national and local NGOs, and government partners,” says Jef. “There’s room for everyone in this universe.” Indeed, the involvement of a range of stakeholders isn’t just a preference – it’s essential to the continuity of any efforts undertaken. “UNHCR will eventually withdraw from a programme,” he says. “But the needs will remain and will transfer on to the shoulders of governments and local agencies.”

Yet even a supra-national body like UNHCR, working at the invitation of governments, is ultimately reliant on the support of individuals – the UN depends on the generosity of its member states, and the political will to support its agencies is influenced by whether national electorates see their work as valuable. That recognition isn’t always there. “The security and wellbeing of refugees ultimately has a role in defining the security and wellbeing of those who are most fortunate,” says Jef. “It’s a shame the important facts – why people become refugees on the one hand, and why people who are not directly concerned should care on the other – have becomes dissociated.”

Which brings us full circle to the role of activism and the power of individual voices raised collectively. “Governments and corporations will not change the way they work until enough demand comes from consumers and from society,” says Francesca, and Nastassia agrees. “Being part of a global network is a privilege I am grateful for,” she says. “It can be used to get the message across borders. To reach an even wider audience, to spread the word further, to gather more signatures for a petition – and to join forces across the world. We need to take action together, as these issues concern all of us.”

See Nastassia’s work at nkantorowicztorres.com and Tanya’s artivism at scorchingskiesart.com. Francesca’s environmental Instagram is @rer00t. Visit wildlifejustice.org to learn about the work of the WJC.

If you’re involved in a campaign for change, we’d love to hear about it. Email [email protected] 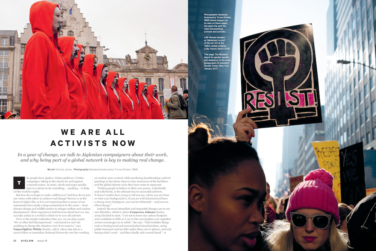