For the first time in two years, the annual Aiglon Rocks concert was performed in front of a full capacity audience, with one staff and four student bands representing both the oldest and youngest members of the school.

With a plethora of tunes were performed, the packed out Parsons hall audience was treated to a variety of different songs and genres; from the 70’s groove ‘Play that funky music white boy’ to the hard hitting, thundering riff of the 90s classic “Smells like teen spirit”, the event gave students an opportunity to not only showcase their musical talents but also a fitting reward for all the hard work they put towards performing.

First on the bill were the famous Kings of Gryon featuring Mr Saunders and Mr Chamberlain, performing three songs of great quality. The highlight of their set was undoubtedly the instantly recognisable “Mr Brightside”, which went down a treat with the crowd.

They were followed by junior school group Normal Sized Children who played two songs: ‘Time of your life’ by Green Day and ‘Zombie’ by the Cranberries. The set list was executed to perfection, with a brilliant vocal performance by Athalia (La Casa, Year 7) as well as great performances from Tess on bass (La Casa, Year 8), Alan on guitar (La Baita, Year 8) and Oliver on keyboards (La Baita, Year 8).

Next up came the extremely entertaining, amusingly named School Sux, with energetic performances of ‘Seven Nation Army’ and ‘Smells Like Teen Spirit’. Highlights included a lively, highly skilled performance from drummer Richard (Alpina, Year 10), the powerful Donna on guitar (Clairmont, Year 10) and the natural exuberance of frontman Jerónimo (Belvedere, Year 10) who delivered a challenging vocal performance with what seemed like ease.

Crowd favourite Amazon Prime then performed for a second consecutive year, featuring myself on bass, Alex and Giwon on electric guitar, Max on drums (all Delaware, Year 12) and Sora on vocals (Alpina, Year 12). The 5 song set included ‘R U Mine?’ and slower songs such as ‘Don't Look Back In Anger,’ which made for an enjoyable performance. The entertainment did not end there as the crowd were treated to the added bonus of stand up comedy routine from Alex between songs, his one-liners causing hysteria amongst the mosh pit.

The show was closed by the Crash Bandicoot Tribute Band who played four songs. Featuring myself on bass and vocals, there were final Aiglon performances from seniors Ash on guitar and vocals and Jonny on drums (both Delaware, Year 13). We performed a cover of ‘Can't Take My Eyes Off You’ and closed the show playing ‘Teenage Dirtbag,’ ending what was an amazing experience. It was an honour to be able to share the stage with these two after a distinguished performance career at Aiglon.

On behalf of everyone who performed at the concert, I would like to thank Mr Dobney and Mr Sakic for organising the event and their role mentoring the bands (as well as putting up with the unimaginable decibel levels which were blasted out of the Oudang Room during practices).

A huge thank you to Mr Norton and Christian (Alpina, Year 12) for providing the professional-level AV and Lighting which we are truly privileged to be able to perform with. Thank you also to Maríano, Antonio and William (Belvedere, Years 9, 11 & 13) and Fiona and Amanda (Exeter, Years 12 & 13) for capturing the event on film. The results of their hard work can be seen in the recordings now on the Aiglon YouTube channel. Be sure to check them out! 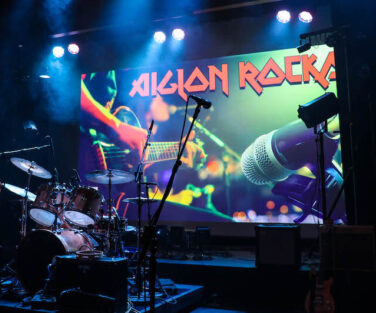