Shh! I have a secret to share. Today I am a university advisor who stresses writing application essays early so they can go through multiple drafts and be perfected by the deadline. However, young Ms. Downing did not embody this philosophy.

In her final year of high school, young Ms. Downing had two essays to write for her dream university. They were due by 1 January. She started writing them on 26 December.

Why, oh why did I wait until the last minute to write these essays? First of all, I didn’t have a university advisor like Aiglon students, an advisor to establish a writing timeline for me and offer feedback on my drafts. Secondly, I did not know what to write. I had heard all the advice to write something original, something that would stand out, but what did that mean for me? What made me unique, what could I say that was different? Since I did not know what to write, I didn’t write until I had to write.

Years later, as an admissions officer who had to evaluate the very essays that had caused me so much stress as a student, I finally knew the “right” answer to application essays:

Be yourself. Share a part of your story that won’t appear elsewhere in the application.

Some of you may now be rolling your eyes at me. “Be yourself” may sound vague and unhelpful, but rest assured that Aiglon’s university advisors will guide you in “being yourself” in your application essays.

In early December, the University Advising Department met with Year 12s to commence the application writing process, nearly a year before any application essays are due. We did very little actual writing that day because before one can write one needs to know what they want to say. Thus, we did exercises with students to reflect on their values and what matters to them, including their academic interests.

The UA Department followed up on these exercises by assigning students self-reflection questions that required them to consider how they have expressed their creativity, how they have demonstrated leadership, and how they have impacted their school communities, among other prompts. Writing these answers helped students to better understand themselves, which will give them the opportunity to craft more thoughtful and revealing statements–more effective statements–for their applications. This exercise also allowed the University Advisors to get to know their students better so we can help them present themselves in the most compelling ways in their applications, including in our letters of recommendation.

From this stage, we will now help the Year 12s complete a finished essay draft (a Personal Statement for UK and global applicants, and a Personal Essay for US applicants) by the end of the term, and we will lead an instructional workshop on the supplemental writing students applying to select American universities will need to complete.

As a former US admissions officer, I am often asked what essays were most memorable to me. Often bad examples come to my mind first, like the time a student inserted a tropical photograph in place of an essay because they were tired of writing essays and assumed I was tired of reading them. I have also read essays that made me blush, essays too revealing about personal matters, like one’s first brush with romance. A good rule of thumb is to only write about topics you would not mind sharing with your grandparents.

The best way for your writing to stand out is to write authentically about yourself.

The UA Department has given Year 12s the gift of time and self-reflection to work on their essays, the two most critical elements of writing effective application materials. Young Ms. Downing didn’t give herself these gifts, but what she has learned from her mistakes can now help her students!

Beth is an Associate Director in Aiglon’s University Advising Department. She joined Aiglon in January 2021 after sixteen years within the University of Pennsylvania’s Office of Admissions. Beth has evaluated over 20,000 university applications, recruited students globally, and spoken at international forums on higher education and admissions. She enjoys working with Aiglon students and exploring the natural beauty of Switzerland with her pup, Jack. 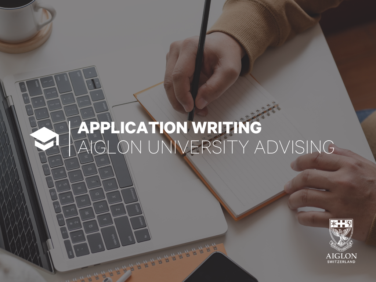 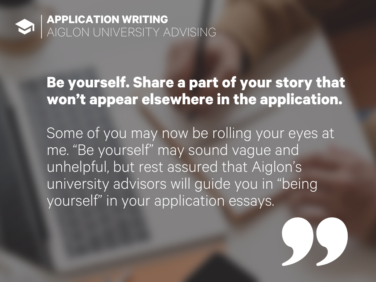 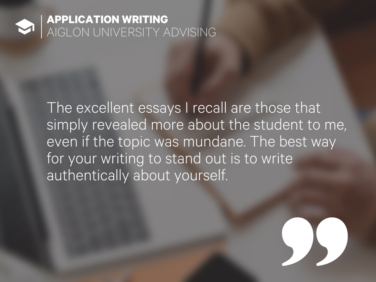